Bay Warland ’20 has always felt emergency medicine was her path. When she was just six years old, her grandfather passed away in a car accident. Her family was on the scene when it happened.

“I was able to see how the fire station and how the fire department worked together as a team and how quickly and effectively they worked,” Warland said. “That kind of drove me since I was little.”

Now, at 20 years old, Warland works as a firefighter during her summers at West Plainfield Fire Station (Station 30) in Northern California. She loves the adrenaline and fast-paced nature of her job.

“You get to some sort of situation, like a car fire or someone stuck in a vehicle, and you have to think outside of the box,” Warland said. “You have to use the skills you were taught in a nonconventional way to solve this problem quickly.”

The majority of calls Station 30 runs in the winter are for medical and traffic collisions. Warland also runs those during her time there, but due to their geographic location bordering grassy foothills, Warland’s station can also be sent out to contain wildfires for up to two weeks at a time in the summer months.

“If we get a call and we’re at the station to go to a particular area, they can keep us there as long as they need us,” Warland said.

The team often camps out at the fire line or returns to “Base Camp,” collectively known as the “headquarters” of the fire, for the evening.

Most of the work done at wildfires is prevention work. Instead of actively putting out fires, the team works to protect areas and structures not yet affected by the fire.

“You can cut a line of dirt around it to protect it or set a wetline,” Warland said. “Basically anything you can do to protect the structure so if the fire does approach it, you can stop it.”

Warland has yet to see two weeks out in the field, but anticipates that will change this summer. California is expected to have one of the worst seasons of wildfires yet, she said. Warland looks forward to returning to the station this summer – she said she finds her work exhilarating and important.

“It’s filled with high intensity but calculated team work,” Warland said. “It’s always hard to know what to expect for each fire you are deployed out to, but working as a team is part of the fun of it.”

As a nursing major, Warland anticipates having a career that incorporates her time at Station 30 and her love of emergency medicine.

“I think I’ll love nursing but I don’t necessarily want to be working in a hospital,” Warland said. “I love being outside and on my feet.”

Right now, her long-term goal is to become a flight nurse working out of a helicopter transporting critical trauma patients.

“I’ve worked with flight nurses as a firefighter and I think that’s why it particularly interests me,” Warland said. “I’ve been able to see how they quickly can come up on a scene and assess it,  know what they’re doing and what the next move is. Their only goal is to stabilize the patient and transport them. It’s super fast paced but highly critical in that moment.”

Warland noted if nursing does not work out, she would love to go back to firefighting and work towards becoming a fire chief somewhere.

Warland takes meaning from the tragedy she experienced as a child, seeing it as the ultimate driving force that pushed her towards firefighting.

“I feel very lucky to have found something that I love doing at such a young age,” Warland said. 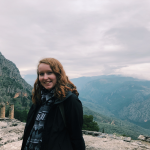