MediaBeat: Tyler Childers is your introduction to real country music

So much of country music represents everything that’s wrong with American culture — posturing, hyper-masculine, manufactured “I’m more redneck than you” bullshit. When people’s catch-all musical taste is summarized as: “a little bit everything, except country,” I get it. The sound of Nashville is fun at the bar, but it starts to drone on and on rather quickly. However, like any genre, there’s space for nuance. There are artists in country music that eschew from the common trends, artists that share real feelings in original ways, artists that, you know, make art. You probably assumed this about country music, but you might not know where to start. I think there’s one man you should start with on your journey into “real” modern country music — his name is Timothy Tyler Childers, and his newest album is a must-listen.

Childers released his first album “Bottles and Bibles” in 2011 when he was just 19. These early tracks were produced independently, but they showed a glimmer of prodigy, and he went on to record these early, simple tracks on several beautiful live EPs in 2013. Childers found his breakout success with “Purgatory,” his 2017 album produced by Sturgill Simpson (another “real country” artist who is a must-listen). Childers followed up on this success with a more ambitious album, “Country Squire” (2019), my personal favorite album of his. It is a connected love letter and ode to his Kentucky home. This is where Childers started showing more of his ambition. He stepped away from simple country romance songs and got creative with production style and subject matter, letting his wit and love for rural Kentucky shine through. In 2020, Childers learned the fiddle while locked away in quarantine, and released a politically-charged fiddle album, another step in his experimental streak.

His latest release, “Can I Take My Hounds to Heaven,” represents Childer’s newest evolution in experimentation. It’s a heartfelt three-sided album telling the stories of his spirituality, the place he calls home, and his evolution from a substance-abusing teen with a six string guitar to a man finding the artistic freedom he deserves. The album is divided into three repeating sets — the “Hallelujah” version, the “Jubilee” version, and the “Joyful Noise” version. Each represents the same set of tracks approached in different ways, sharing different visions and stories. “Hallelujah” sounds a bit like the “traditional” Childers with his voice and simple instrumentation. “Jubilee” gets into more backing tracks with gospel choirs, sampled monologues, and a more electric feel. Finally, “Joyful Noise” is just what it sounds like — samples aplenty and the most experimental production style on the album.

“Can I Take My Hounds To Heaven” isn’t necessarily a linear listening experience, nor is it the most wholly original product Childers produced. There are some tracks served best by one style, and others with more samples and electric production. It isn’t an album where you sit straight through, comparing the versions. It’s an experience best listened to intently, in my opinion, while you enjoy the variations of all three creative visions that Childers has given you. This is what I think makes Childers the best introductory artist of “heartfelt country.” “Can I Take My Hounds to Heaven” isn’t an album devised specifically to sell copies. No, it’s just a man and his passion for having fun, sharing personal experiences, and engaging with his listener. Without a doubt, he knows how to get to the heart of what country music is truly all about. 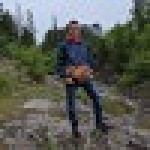